The management of Newstide Publications Limited, publishers of Prime Business Africa, has announced Thursday, August 11 colloquium in honour of the late Nigerian diplomat, Ambassador Ejeviome Eloho Otobo who was a member of its Board of Directors.

The virtual event will hold at 6 p.m. and will have his family in New York joining his colleague diplomats like Oseloka Obaze and Joe Keshi in a colloquium and tribute evening that will X-ray Otobo’s belief in Africa renaissance.

Late Ambassador Otobo, aged 70, who also served as a member of the Editorial Board of Prime Business Africa, died unexpectedly on June 23, 2022, in Tuckahoe, neighbourhood, Westchester County, New York, the United States where he has been residing for many years. He was reportedly declared missing and later found dead in the neighbourhood.

He was buried on Friday, July 22 at Gate of Heaven Cemetery, Westchester County, New York.

Ambassador Otobo made invaluable contributions in editorial matters of the Independent business newspaper, PBA. At the Newstide Board, he equally made significant inputs on matters of effective corporate governance for effective management of a 21st century multimedia company.

He had also within the last one year actively participated in Prime Business Africa’s flagship monthly webinar – the Socio-Economic and Entrepreneurship Development Series (SEEDS), which provides enriching discourse on Africa’s socio-economic development. Otobo, together with other experts, brought his rich global and diplomatic experiences to bear on the SEEDS organised by PBA to ventilate ideas on practical tips for driving development for African economies, especially in the post-COVID pandemic era.

The colloquium tagged, “The Africa of Ambassador Eloho Otobo’s Dream”, will be held virtually on Thursday, August 11 at 6 pm West African Time, a day to his memorial which will be held in New York on August 12.

The colloquium to be held in honour of Otobo, will enlist the participation of members of the diplomatic community, colleagues, friends and family.

To lead the discussion is Ambassador Oseloka Obaze, a former member of the Nigerian Diplomatic Service to the United Nations, and governorship candidate of the Peoples Democratic Party in the 2017 Anambra State governorship election. Also joining from the diplomatic community is Ambassador Joe Keshi, who will be a moderator. Ambassador Keshi is a retired Nigerian diplomat and chairman, the board of directors of United Bank for Africa. He served as Permanent Secretary, Ministry of Foreign Affairs, and also worked in Nigeria’s foreign missions in different countries of the world, including Togo, Ethiopia, Belgium, the Netherlands, Namibia, and Sierra Leone. The founder of Africa Media Agency, Eloine Barry, who is also a member of PBA Editorial Board, will be the co-moderator.

Others to anchor the webinar include the Chairman and Deputy Chairman of the Newstide Publications Board of Directors, Dr. Bongo Adi, and Prof. Chinyere Stella Okunna, as co-hosts respectively. Dr. Adi is a renowned Nigerian development economist with the Lagos Business School (LBS).

READ ALSO  Strike Can Be Resolved In 2 Days, Not Weeks – ASUU President Replies Buhari On Ultimatum 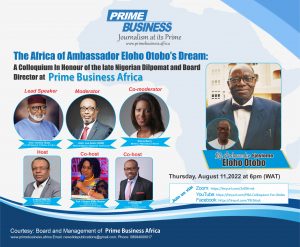 The host of the webinar, Dr Marcel Mbamalu, publisher/editor-in-chief of the multimedia company, said the event will reflect on the philosophical ideals and pan-African stance of the late diplomat as gleaned from his contributions to socio-economic and governance issues in Africa in the areas of trade relations, policy, and peacebuilding for continental development.

Earlier, while commenting on the passing of Otobo, Dr. Mbamalu, a veteran editor and Journalism teacher, had said the intellectual bent Ambassador Otobo brings to bear on debates during Board meetings and in his personal discussions with him was unparalleled.

“He often insisted on doing the right things at the right time. Otobo came across as not just a diplomat and prolific author but a great teacher and journalist, the traits that drew and endeared him to me, hence our strong professional bond since my days as an Editor at The Guardian Nigeria”, said Dr Mbamalu.

“He featured on Prime Business Africas monthly SEEDS webinar as a strong voice and willing driver of change in Africa. We pray that his youthful wife and hardworking children will find solace in the great legacy which Ambassador Otobo left behind,” Dr. Mbamalu stated.

Between 2014 and 2016, Otobo also served as a member of the External Experts Advisory Board of the Informing Conflict Prevention, Resolution and Response: The Role of Media in Violent Conflict (INFOCORE) Project funded by the European Unions Seventh Framework Programme for Research, Technological Development and Demonstration. He has also consulted for the African Union Mission to the United Nations in New York on issues of Peace-building.