The conclusion, perhaps, puts paid to the debate on what benefits (or otherwise) there are in demutualising such a member-owned, non-profit, self-regulatory organisation to become a profit-oriented, investor-owned corporation. At least, that’s the way it comes across at present.
From its initial seven shareholders at incorporation on September 15, 1960, to the cancellation of equity ownership rights of shareholders on December 18, 1990, The Nigerian Stock Exchange was, for over 60 years, controlled by its members, with significant influence from the public sector.

Shareholders’ equity ownership rights were cancelled in 1990, following the enactment of the Company and Allied Matters Act that prohibits registered companies limited by guarantee from having share capital.
It would appear that investors and the general public do misconstrue the Exchange as a public service entity subject to statutory reporting standards and ownership.

This is not the case; the Exchange was never owned by government: Not the federal nor any of the subnational governments we call states.

The NSE was owned by its broker and dealer members. To wit, the difference is that a broker only executes clients’ trades on the Exchange, and dealers their own proprietary trades.

By implication, brokers are not expected to keep proprietary accounts to avoid conflicts of interests with clients’ mandates. While the NSE was member-owned, neither the broker nor the dealers had equity-ownership rights over the NSE, being a company limited by guarantee, with no share capital. A key theme of demutualisation is the change in ownership structure of the Exchange. So, from the member-owned structure, demutualisation has rendered the ownership of the NGX to shareholders, with the initial shareholders being broker and dealer-member firms, who were allotted shares of the NGX on a pro-rata basis.

Demutualisation now avails opportunity for any interested individual investor or firm, broker or not, to have equity interest in NGX. With the shares of the NGX actively being traded over the counter at the NASD-OTC Exchange, any qualified investor can buy and sell the shares of NGX.

Controlling Interest in NGX And What It Means For Market Growth

The NGX has a total of 1,964,115,918 units of ordinary shares distributed to dealing and ordinary members in the ratio of 78:22. Each dealing member received 6,007,884 units, while each of the ordinary members got 2,441,274 units. The distribution rationale took cognisance of the contribution of the dealing and ordinary members to the development of the NSE over the past 60 years. While NGX ownership may be presently fragmented , given the pro rata distribution of the shares to brokerage/dealing firms, the liquidity of NGX shares presents opportunity to individuals and institutional investors to take equity stakes in the Exchange.

Who then would control the NGX going forward? The eventual reality of this question will have notable implications for the sustainability and growth of the NGX and indeed the broader capital market, given the role of the NGX in deepening the Nigerian capital market. Short of saying that one or few high networth individuals would, in no time, take control of the NGX, as most of the fringe brokers may divest their shares to either shore up capital positions or restructure their respective businesses, as imminent changes to the market structure may inadvertently take out weak participants. Hopefully, the new core shareholders would be acceptable to the market and inspire confidence in the governance and prospects of the NGX. This reinforces the need for enhanced regulatory oversight on critical market infrastructures, as the sustainability and governance of these institutions have implications for the growth and development of the capital market.

Like every company, the ownership structure, and more importantly, the posture and culture of core shareholders of an Exchange, defines the governance and sustainability of the institution. Interestingly, this is more important for capital trade points like the NGX, whose brand identity, market perception and governance would have significant impact on its attractiveness as a listing destination and veritable platform for capital formation.

Beyond the “fancy,” the ownership structure and perception of NGX corporate governance must reinforce investor confidence and market integrity. For instance, the ownership structure of NGX may either stimulate new listings or trigger de-listings, as companies assess the governance of the NGX in weighing the cost and benefits of listing on the Exchange. Beyond the primary market, the secondary market activity and the liquidity of the Exchange would be vulnerable to market perception about the governance of the institution.

To mitigate the market-wide risk that may arise from hostile takeover or overbearing influence of an institution or individual in the control of demutualised Exchanges, regulators often set limits on ownership (5% in some jurisdiction, but as much as 15% in others). Interestingly, in markets where there are no restrictions on ownership, the regulator plays an active role in monitoring shareholding with particular emphasis on the ultimate beneficial owners and assessment of the competency and suitability of such ownership for the public interest that the Exchange serves. 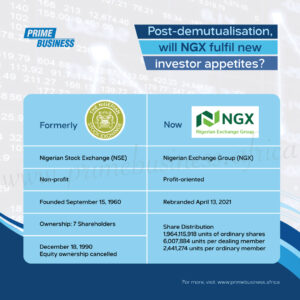 Beyond Ownership, What Prospects for Efficiency Gains?

Unlike its 60-year history as non-profit, mutually-owned and self-regulated organisation enjoying monopolistic powers, the NGX is now a profit-oriented institution, a salient phenomenon that may trigger some shifts in commercial and operating models.

Notwithstanding the cost efficiency slack that might arise from unbundling the erstwhile structure, the leadership of the NGX will henceforth be answerable to shareholders who would demand competitive return on investments. Even so, the NSE has, over the past few years, operated a surplus, with excess revenue over expenditure, the “profitability” has been below peers. For instance, assuming the “surplus after tax” would be its supposed “profit after tax,” the NSE, over the past few years, has delivered single-digit return on equity, far below demutualised peer average of 15% and, indeed, below what investors would consider as its cost of equity. To this end, the NGX may be under pressure to scale up revenue generation while improving cost efficiency, going forward, a phenomenon that might lead to a number of decisions, including business expansion beyond its traditional core and rightsizing, among other strategic initiatives.

Whatever path it takes, the leadership of the NGX would certainly need to demonstrate to shareholders that it has the capacity to deliver superior returns. Incidentally, this may lead to new licensing frameworks, review of fees and levies, as well as enhanced product offerings among other tactical initiatives to enhance earnings capacity and overall profitability of the NGX Group.

READ ALSO  When Starvation Gains You So Much Weight!

Interestingly, the profitability of the NGX may also be pertinent for its perception and attractiveness as a destination for capital formation and order flows, hence reinforcing the significance of extracting latent and new efficiency gains from its new structure. With the pressure to deepen liquidity and profitability, NGX may be set to change its business model, with probable breakaway from its conventional model of limiting market intermediation to its dealing members. Interestingly, with the electronic trading environment and new norm occasioned by COVID-19, the NGX may fulfil foreign investors’ appetite for straight-through processing, a probable strategy to stimualte international order flows.
Thus, the NGX may welcome new categories of participants, even as a number of existing ones might drop off the train for varying reasons. Specifically, small players may either become unprofitable, as brokerage margins continue to thin out, or unable to meet probable changes in minimum operating standards. Looking back at demutualisation in a few emerging markets, it was a strategic move to smoke out and disenfranchise members who had hitherto undermined trading business systems and innovation.

With the independence and agility that come with demutualisation, the NGX may take decision on business rationality, with little or no sentiment for the equity and social considerations that have dominated the market over the past 60 years.

More so, the new structure provides basis to shift the orientation of the NGX from serving the interest of members to the pursuit of investor interest, a fundamental critical to the growth of the market. This is seen as one of the most important rationales for demutualisation, as it helps to eliminate the apparent conflict of interest between protecting and advancing investors’ interest and preserving the commercial interests of the intermediary firms, who were owner-members of the Exchange, with notable influence on the management of the institution, pre-demutualisation.