The Independent National Electoral Commission (INEC) has released list of candidates for the November 6 Governorship Election in Anambra state.

The Commission in the list published on Friday, blacklisted the Peoples Democratic Party (PDP), dropping the name of Valentine Ozigbo in obedience to court order and also dropping Charles Chukwuma Soludo as the candidate of the All Progressives Grand Alliance (APGA).

Recall that Prime Business Africa, earlier reported that an FCT High Court ordered the Independent National Electoral Commission (INEC) to refrain from publishing any name as candidate of the PDP in the Anambra State’s November 6 governorship election. 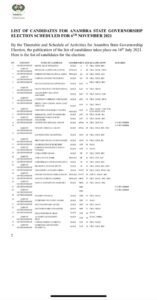 INEC replaced Soludo’s name as APGA candidate with the name of a member of the House of Representatives, Chukwuma Michael Umeoji as the candidate.

The commission also named Andy Uba, who won the controversial primaries of All progressives Congress (APC), as the candidate of the party.

INEC’s National Commissioner and Chairman (Information and Voter Education Committee), Festus Okoye, in a statement, said the decisions were based on obedience to court orders served on INEC in relation to the primaries of the political parties and other processes leading to the election.

Okoye said the commission would continue to act in consonance with the constitution and the law and will continue to obey the judgments and orders of courts served on it.