Ahead of the 2023 general elections, Labour Party presidential candidate, Mr. Peter Obi has stated that rebuilding Nigeria will not be based on religion or ethnicity, but a collective resolve to stamp out corruption and boost production.

The former Anambra State Governor who was welcomed by a mammoth crowd in the southwest ancient city, said his quest is to tackle the challenges of corruption, insecurity, health, education unemployment, and infrastructural deficit that have collectively stagnated development in many fronts in the country.

He said “the Labour Party is laying the foundation for a new Nigeria that the citizen will be proud of.

“We will ensure that we move Nigeria from consumption to production. We will create jobs for youths. Out youths are energetic and always ready to work.

“We will fight corruption. We will create wealth. We are not going to share our commonwealth. Nigeria, today has become a laughing stock.

“New Nigeria will not be built on religion, ethnicity. We will work to end incessant strikes by members of the Academic Staff Unions of Universities (ASUU).”

Emphasising the link between insecurity and poverty, Mr. Obi said, “We must secure and unite the country. When you secure the country, you are able to bring farmers to return to the farm. That alone will start addressing food inflation.”

“By moving the country from consumption to production you are moving people away from poverty. The more you pull people out of poverty, the more you address criminality.”

“Nigeria now has 13.8 per cent drug prevalence against the global average of 5 per cent. To deal with that crisis is production. We need to feed ourselves.”

He also harped on returning Lagos and Ibadan to their past glorious days saying,

“We will return Lagos to the financial centre of Africa while the lost glory of the ancient city of Ibadan will be returned.”

In his address, the National Chairman of the party, Julius Agbure said the Labour Party has a solution to the myriad problems confronting the nation. 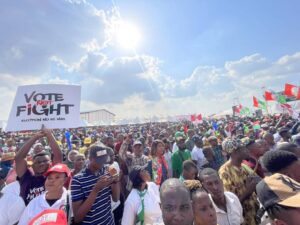