It was an unprecedented scene in Abuja on Saturday when thousands of supporters of the Labour Party’s presidential candidate, Mr. Peter Obi, trooped out to stage a peaceful rally.

Under tight security, the pro-Obi supporters also called Obi-dients, marched from the Unity Fountain to Moshood Abiola Stadium. Holding the Labour Party flag, the supporters chanted songs and made statements that the Obi-Datti presidential bid is beyond social media.

The rally attracted huge attention when a newly wed couple, Mr. and Mrs. Adamson joined the Obi’s supporters. The couple, who were said to be heading home from the venue of their wedding, stopped and joined the rally along with the groom’s men and bride’s maids.

The pictures and videos of the rally that went viral showed the couple holding the LP flag and flower vase dancing with the mammoth crowd and expressing their support for the LP presidential candidate and his running mate.

In one of the Twitter threads about the event, an Obi supporter while hailing the couple for what they did, urged them to name their first child Peter, perhaps, in commemoration of what happened on the day of their wedding. 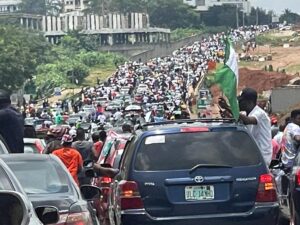 In response to the gesture by his supporters, Obi in his official Twitter handle congratulated the couple and thanked them for identifying with his supporters and joining the rally. He wished them happy married life.

“Salute and congratulations to this newly wedded couple in Abuja, whose special day coincided with the Obidient Family March in Abuja; and they marched too! Wishing you both a blissful and happy married life and children, who will grow up in a united, secure and productive Nigeria,” Obi wrote.

Obi who visited the Emir of Kano on Saturday with his running Yusuf Baba-Ahmed Datti for consultation,thanked the supporters for the solidarity rally.

“From Kano, I am watching the OBIdients gathered in Abuja and exercising their Constitutional rights to peaceful assembly. I salute you all. I appreciate you all. God bless you all and God bless the Federal Republic of Nigeria,” Obi tweeted.

In an attempt to counter critics who claim that Obi, Datti and Labour Party do not have physical structures, the Conference of Peter Obi Grassroots Ambassadors, in a statement on Saturday, said Obi will win a simple majority vote and also secure the 25 per cent constitutional requirements across at least 24 states of the federation in the 2023 election.

In the statement signed by Hon. Hassan Usman Algungu (National Coordinator), Dr. Gabriel Ayodeji (National Secretary), as well as Hajiya Nana Tukur (Director of Women Mobilisation), the group said the critics are afraid of the emergence of Obi and Datti, and resorted to lies against their candidacy and the party.

“It has gotten to our notice of lies being peddled by some unscrupulous elements paid to install uncertainty, fear and discouragement targeted at misleading the general public by alleging that our leader Mr. Peter Obi can’t secure 25 per cent votes in at least two-thirds of states, as enshrined in the Constitution.

“For us, this amounts to the blatant lie told in the public domain by the same people who know the truth in their hearts that of the three top contenders, Mr. Peter Obi has better chances of winning in more states over and above his counterparts.

“If the sole aim of this propaganda is not pure mischief and an attempt to swindle the public, since this is a political contest targeted at producing a single winner; wouldn’t it have been wiser to rather keep mute knowing your opponent is on a lane of failure?

“Peter Obi has set the establishment off balance and they know he is closer to victory than them all.

“Hence, the resolve to resort to lies. We are very confident of his victory because we have done our homework and the result have started trickling in soon it will be very obvious to even the blind that the narrative of ‘structure” and another campaign of calumny have now been overtaken by events.”

The group insisted that LP has political structure which is growing stronger as the election day draws closer, adding that more arrangements are being made to consolidate it.

“We have deliberately and strategically set up committed foot soldiers across every nook and cranny of Nigeria including the Northern part of the country comprising men and women of capacity, capable of delivering.

“Peter Obi as it stands now will comfortably secure more than the 25 per cent constitutional requirement in 14 states out of the 19 states that formed the northern part of Nigeria while we have the 5 remaining states in the North under steady reinforcement. With God on our side, we shall demystify the mystery responsible for Bad Governance in Nigeria 2023.

“To the teaming responsible members of our society and supporters of the OBIdient movement and labour party, we urge you to remain steadfast and resolute in your support for Peter Obi and the new Nigeria project as he remains the only candidate with clear programmes and implementation templates to take Nigeria out of this quagmire,” the statement added.

Governor Soludo’s Misreading Of History, The Moment And Near Future