Lagos-based premium recreation  group, the Ikoyi Club, on Tuesday, announced that it had placed one of its  distinguished members, Modupe Alakija, on one-year suspension for physically assaulting a fellow member.

Alakija is a lawyer of repute and husband of one of Africa’s richest women and entrepreneur per excellence, Mrs Folorunsho Alakija.

In a statement signed by the Honorary Secretary of the Club, Bamidele Ibironke,  and printed on its  letterhead, the Club said Alakija’s suspension was with immediate effect.

“The above-named member of the Club is hereby placed on a one (1) year suspension from the Club for physically assaulting and abusing a fellow member, conduct injurious to the interest of the Club, thereby violating Rule 9 (c) of the Club’s Rule Book. 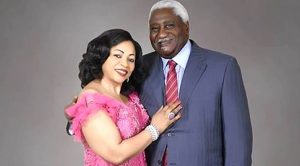 The rich Alakija couple who got married in 1976 are ranked 20th in the Forbes Billionaire status  and own several investments in the Oil and Real Estate sectors with a combined net worth running into millions of dollars.