Haaland’s goals made it the third successive treble for the former Borussia Dortmund striker in three home games.

Manchester City’s early dominance highlighted by the triple David De Gea saves paid off in the 8th minute when Phil Foden finished a Bernardo Silva cross into the box.

The goal was Foden’s first goal in the derby from eight matches against the Red Devils.

The United right back spot became the target of the City forwards following the yellow card recorded by Diogo Dalot who was sidestepped by Kevin de Bruyne to lay a promising pass to Foden in the 20th minute but his snap shot went wide.

League top scorer Erling Haaland was at the double for City with two goals in the space of four minutes.

First, the Norwegian in the 34th minute powered his header beyond the goalline despite the efforts of  Tyrell Malacia to clear it. The goal line technology confirmed the ball crossed the line.

Haaland then stretched at the back end to steer a delightful cross into the net for his 13th Premier League goal this season. 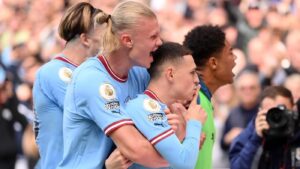 Foden has now scored against all the ‘top six’ clubs in the league.

United fans had something to cheer about in the 56th minute when Brazilian forward Antony curled home a beautiful shot from about 25 yards from goal.

Erik ten Hag brought on the duo of Anthony Martial and Casemiro for Marcus Rashford and Scott McTominay after United scored through the Frenchman.

City went 5-1 up at the Etihad Stadium 26 minutes to full time when Haaland completed his treble, sweeping home a fine cross. That ensured he broke Michael Owen’s record of the fastest hat-tricks in the topflight.

Foden got his hatrrick before he was withdrawn in the second half albeit the VAR had to confirm if the whole of the ball had crossed the line when Kevin de Bruyne was close to the throw-in spot.

Anthony Martial headed home from close range in the 84th minute after City keeper Ederson spilled Fred’s rasping shot. It was a goal that minimised the humiliation but unlikely to change anything in United’s favour.

However Martial soon scored his brace from the penalty spot after he was fouled inside the box to bring some respectability to the scoreline.

The dollar rate was in opposite directions at the black