New national chairman of the All Progressives Congress (APC), Senator Adamu Abdullahi and other members of the Party’s new leadership have received their certificates of return.

Chairman of the Election/Planning Sub-Committee for the recently-conducted National Convention of the APC and Governor of Jigawa State, Muhammad Abubakar Badaru presented the certificates to them at the party’s National Secretariat in Abuja on Friday.

The ruling APC had its national convention last Saturday, March 26, where delegates from across the 36 states of the Federation and the FCT gathered at Eagle Square, Abuja to elect leaders of the party ahead of the 2023 general elections.

The new party leaders were subsequently sworn in on Sunday, 27 March, 2022 at the same venue of the convention.

Presenting the certificates to the new party leaders, Badaru said, “I use this opportunity to once more congratulate our Chairman and also thank President Muhammadu Buhari for his guidance and his kind words and for his appeal to Party members to embrace consensus which has helped the Election Committee to do their job smoothly and easily.”

He noted that there were 78 positions contested for – the National Executive Committee (NEC) members and the zonal executives, but consensus was used to get 66 positions while elections were conducted for only 12 positions.

“This demonstrates the fact that the APC is indeed one family and the members will always listen to President Muhammadu Buhari and his call for peace and unity of the party,” Badaru added.

He thanked all contestants for adhering to rules of the game and especially to the contestants who withdrew prior to the convention for the consensus to prevail.

“We thank all the contestants for really behaving in a mature and understanding manner for the interest and progress of our party. They are heroes of our party. Despite their personal interests, they chose to withdraw to allow for consensus so that our party will come out stronger and indeed this was what happened. I thank them and I believe they deserve all our commendations and the party will never forget them,” Badaru concluded.

On his part, Abdullahi thanked the Election/Planning Sub-Committee for conducting their assignments in the convention in a “very efficient and honest” manner.

His words “The National Convention is all about electing new officers for our great party. And the Election/Planning Sub-Committee conducted its assignments in a very efficient, honest and very equitable manner as circumstances of the day permitted. We appreciate you.

“So thank you very much for spending time to be with us on this occasion and we look forward to your cooperation every way you can.”

The new national chairman noted that the new leadership has enormous responsibility ahead and cannot afford to fail in ensuring that the party emerges successful in upcoming elections.

“We have zero tolerance for failure in this new dispensation of our great party, because we have an enormous responsibility ahead.

READ ALSO  How Everyone Can Make Money On Tiktok Easily

“On the coming elections, we cannot move the way we are to election. We have a marching order by the leader of this party, President Muhammadu Buhari. We will have to deliver, there will be no excuses whatsoever and we need every hands on deck for this to happen. Thank you very much,” Abdullahi stated. 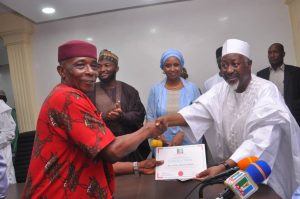