Nigerians have reacted to a viral video showing the All Progressives Congress (APC) presidential candidate, Bola Ahmed Tinubu prostrate before Orji Kalu’s mother during his visit to the former Abia state governor’s Abuja home on Sunday.

As Tinubu and his entourage arrived, Kalu who currently represents Abia North Senatorial District in the national assembly, was heard saying in the video “Where is Mama? come and greet your visitor”. The mother, Mrs Eunice Uzor-Kalu who is popularly called “Mama Abia” in the state, came out to receive Tinubu who alighted from the Prado SUV parked very close to the enterance of the sitting room.

“Let me greet in Yoruba style,” Tinubu says, as he bends to touch the floor before the towering “Mama Abia” and to broad smiles of the visibly elated Orji Kalu.

Speaker of the House of Representatives, Femi Gbajabiamila was also seen immediately joining Tinubu to salute Orji Kalu’s mother but without bending down as his principal did.

A cross-section of Nigerians who commented on the APC presidential candidate’s gesture in Abuja during the weekend expressed diverse feelings regarding the manner of greeting and the responses from Orji Uzor Kalu’s mother.

While some applauded Tinubu for the visit to Orji Kalu’s mother in Abuja, others said the gesture was a mere act for the camera. “All na fake ooo,” one of the social media users wrote, trying to counter what Tinubu said in the video as reason for his obsequious display being in line with Yoruba tradition. 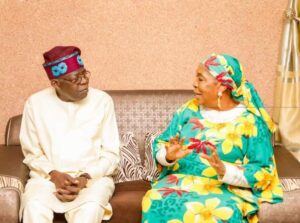 Some also chided Kalu’s mother for not reciprocating Tinubu’s gesture by bending a little bit as a form of respect, arguing that such is not an Igbo attitude of humility as a woman.

“But the attitude was not Igbo at all. A little bending down in reciprocity to the man’s ‘dobale’. A little pretentious show of womanly humility,” one of the social media users wrote.

“That’s why she is referred to as Mama Abia… The Kingmaker,” another replied on a WhatsApp platform.

Reacting to the outing also, @UnekwuOjo queried whether bending to greet someone has turned to be a campaign strategy. “Bending down to Greet an elder is now a campaign point aimed at impressing Nigerians?

“Was he supposed to hug her like his schoolmate? Marketing of Ancient Days is indeed an Extreme Sport.”
“Na eye service Tinubu go do sha, we know the story of mama Orji Uzor Kalu,” says @Cjay_dgreat.

The Minister of State for Labour and Employment, and spokesperson for Tinubu presidential campaign, while writing on his official Twitter handle about the visit on Sunday said it is part of his efforts in unifying “home fronts” ahead of the election next year.

“As fit as a fiddle: @officialABAT arriving the home of the mum of Sen. Orji Kalu earlier yesterday (Sunday) & bending down in the normal Yoruba traditional way to greet her as an elder.
“The real unifier, @officialABAT⁩ is moving stealthily to unite his home front,” @fkeyamo tweeted.

As the 2023 presidential campaign draw closer and closer, Tinubu has been variously described as having uncomfortably avoided important activities in the Southeast and his weekend visit to Orji Uzor Kalu’s mother in Abuja as  probably a precursor to things to come.