The National Association of Nigerian Students (NANS) has called for total reversal of the proposed consolidated service fee by the management of the University of Nigeria, Nsukka (UNN).

This comes as Prime Business Africa reports that UNN authorities have invited the protesting students for negotiation on the contentious ‘consolidated service charge’.

The Students had begun protests on Thursday evening over the proposed 100 per cent increase in school fees, which sources close to the University authorities said were ‘service charges.’

The protest continued on Friday and Saturday in both Nsukka and Enugu campuses of the Nigeria’s first autonomous university.

Prime Business Africa reports that the university administration had published a memo on Thursday indicating categories of fees to be paid by the students. 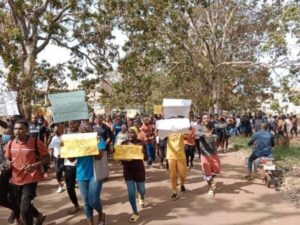 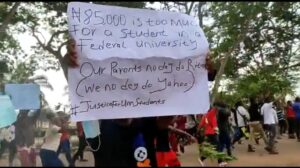 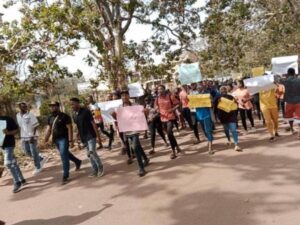 Some students who spoke with Prime Business Africa on condition of anonymity said that before the new development, old students in the institution paid a fee of N40,000, and new students N83,000.

In a statement signed by the Chairman and Secretary of NANS, Enugu State Chapter, Comrades Ikechukwu Emmanuel and Chinonso Nwobodo, respectively, which was released on Friday, December 2, 2022, the student body said its office had been inundated with complaints from students regarding the proposal and condemned any form of fee hike without considering the plight of students in the face of Nigeria’s current economic challenges.

NANS Enugu chapter gave the UNN administration 72-hour ultimatum to reverse the fee increase or be ready for mass action from the students body.

The group said its investigation shows that UNN, prior to the fee hike, was the only federal institution in the Southeast with  very high tuition fee and one of the highest in the entire country.

“The National Association of Nigeria Students NANS is strongly averse to any form of tuition increment that does not place students as major indices for consideration,” the statement read.

“NANS is all out and ready to resist this increment with every weapon within its arsenal. We call on the Vice Chancellor, Governing Council and the entire management of UNN to effect a total reversal or face a mass action from the largest students movement in West Africa. Anything short of total reversal leaves UNN ready to be occupied by Nigerian students.

“We are issuing a 72 hours ultimatum to the management of UNN to do everything necessary to completely reverse this increment. At the expiration of the three (3) days, Nigerian students will be forced to occupy UNN. This is not a threat, it is a sincere promise.”

It urged UNN students to put on hold any school fee payment until the matter is resolved.

“We entreat every Nigerian Student in UNN to put on hold every process of fees payment and stand with us as we wait, engage and hope that the management of UNN will consider the plight of students and effect a total reversal.

“Any student that goes ahead to pay should not come begging for a refund,” the NANS warned in the statement.

Meanwhile, a delegation of the UNN Student Union Government on Friday, had an emergency meeting with the university administration to discuss the way forward.

The SUG director of Information, Comrade Onwe Marcellinus, who spoke with Prime Business Africa on telephone, confirmed that the increment is over 100 percent.

He said the aim of the agitation by students was to register their displeasure over the proposed increase and that has been achieved as the school administration has already called them to the negotiation table.

He disclosed that it was agreed at the emergency meeting that students should come up with a proposal for fees increase that would be fair to both parties.

When asked what the students proposed, Onwe stated that the consideration would be between 30 and 50 per cent increment, although both parties are yet to come to a conclusion on the matter.

He said: “We are negotiating with the school administration to see what can be done regarding the situation.

“We concluded at the meeting that we are going to draft a proposal for an increment that is suitable for both students and parents.

“We have made it quite clear that school fees increase definitely has to come. We are trying to make students understand the situation of things because some factors that are making it inevitable have come to light.

“What we are negotiating now is a fair increase and what the students are looking for at the moment is about 30 to 50 percent increment, but we are yet to conclude.”

On whether the school authority is likely to accept any increment within the range being proposed, he said that due to the tensed atmosphere it is their hope that the school would have to bend a bit to accommodate the interest of students to avoid escalating the situation.