At the age of 70, Mrs Justina Nwamalubia Obi bagged her PhD at the University of Nigeria Nsukka and was among the 3000 graduates decorated with higher degrees on Saturday, June 12, 2021. In this exclusive interview with PRIME BUSINESS AFRICA in Enugu, Madam Justina takes Chief Correspondent VICTOR EZEJA on a journey in dignity of learning and self determination for economic empowerment.

Tell us about your educational background?

I had my Masters in Mass communication in 1989 from the UNN, but I first read English and Literary studies as my first degree from the same UNN between 1973 and 1977.

How many children do you have?

There are four, the last one was born in 1983. Three-to-one. Three boys and one girl.

Are they all graduates?

Yes, they are all graduates.

What motivated you into going for further studies given your age?

My admission was 2009/2010. I worked as a broadcaster, so I didn’t start in teaching. You see, I retired before my retirement was due. I did so voluntarily, and then I came into teaching.

How long did you work as a broadcaster?

I worked as a broadcaster for 28 years.

You started immediately you finished your first degree?

I first did my youth service in broadcasting, at the Anambra Broadcasting Service (ABS), Enugu, then old Anambra State. Subsequently, with the creation of new Anambra State, we moved down to Awka where they have their headquarters now. There, I continued working till 2005 when I voluntarily retired, because I got tired of coming to Awka from Enugu. I came from Enugu because that’s where my husband lived. As a news editor, sometimes you end very late because for instance sometimes they come and tell you the governor’s story is coming and you keep waiting.

I remember a day I finished around 9pm. Then I normally drove to work from Enugu. I remember one incident when I had a flat tyre. It was after that I began looking for a house in Awka. When I couldn’t find a house to rent, I tried the idea of coming from the village. When that did not work, I returned to the original plan of going from Enugu, however, this time I no longer drove.

Let’s talk about the death of your husband?

By 2013, my husband was coming back from a meeting and had an accident somewhere in Benue. He was then the National President of Town Planners Registration Council (TOPREC). They had gone for a meeting in Abuja, and he was coming back. That day we spoke, on a Saturday. He called me around 10am and said they were already at Lokoja. I said Lokoja so early? So you will soon come back, he said yes. He started talking, at a point we didn’t hear each other very well. I said well, okay, safe journey. I waited and waited and waited. I had something to do at the cybercafe. I related the story to the young man there, I said see my husband should have been back by now. I said ok maybe it is rain. Those days when it rains there is somewhere you have flood around Lokoja. At a point I packed, I couldn’t do anything again. I packed my laptop and went back to the house. I bought bread and said today I don’t think I can cook. Quite long after, I had a call and it was his number, and the person was saying “madam, madam”. I thought maybe it was kidnappers. I was like where will I find millions. But he just said he had an accident. I said is he alive? He said yes. But he had already died then. After that, after burying him and all that, I broke down. I suppose it was the trauma. In fact I didn’t come to work for months. But when I picked up the pieces I continued, and here I am. By the grace of God I finally completed the programme. And I had a very good supervisor.

Who was your Supervisor?

At the time I went in for the programme, I guess I was nearing 60 (years), so the children were all on their own. In fact, none was living with us. So that was not a problem. What was a problem was that I had so many activities in the parish, and that one kept me busy, because every day I knew I had to move from work to the CWO office in my parish, because we had a small business centre that I was also managing. And every day was like I would get to my house around 9pm. My husband was very understanding though. And somehow, I managed, I coped, and went on.

How long have you been into this academic work?

How has the experience been?

The experience is… there is a difference between working in the, do I say public service? When I was in the public service, normally when you go home, you are finished with the work, but this one, you take work home, you will get up at 2am, you will get up at 3am, you are always busy, there is hardly any holiday. So it’s a busier life, but it’s rewarding, you meet these kids and you help remold them.

Was it because you were already in academia that you decided to further your studies?

Indeed, when I was still working (as a broadcaster), I made an effort to do this PhD, but you know Nsukka was not doing it. Nsukka was not doing PhD in Mass Communication then. So when I went to Lagos, UNILAG, I tried and they said there was no supervisor. At a certain level there must be a supervisor before you are admitted. They said there was nobody to supervise me. When you go to do a PhD in most schools, they will look at the availability of people who can supervise you. If there is none, even if you are qualified to be admitted, you may not gain the admission. So they said there was nobody to supervise me. I came back and continued working. I even went to Uyo, I don’t know what they said. I think I have always had that urge even when I wasn’t teaching to extend the academic experience.

Now you have children and grandchildren, how delighted do you think they will feel seeing you getting this achievement at this age?

They are very happy, especially one of my sons. He said he felt like crying when I told him that I have defended my PhD. They are happy. My daughter is also doing her PhD and I hope by God’s grace, she will graduate, maybe this year or next year. She is the academic one among them.

Which area did your daughter study?

She read Pure and Industrial Chemistry at Unizik, (Nnamdi Azikiwe University, Awka). But she is in Ireland now. She is also doing something related to chemistry.

Was she lecturing before she went there?

No, she wasn’t. She was working at Conoil, then decided to travel out, and had a rough experience before she got to where she is today. She was working here and there, but now she lectures as they are utilizing her as an assistant. She had eight As in her SSCE. So I said look, don’t let it waste, pick it up and utilize it. You know, when you are abroad, you stay a certain number of years before you are qualified to do something. There are technicalities there. So she did her Masters and then got a scholarship for the PhD. 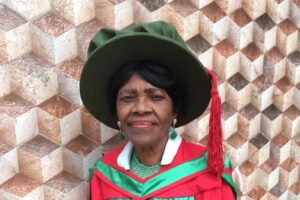 Apart from being in the academic environment, is there any other thing that motivated you to go for further studies up to PhD level?

I like reading a lot. I like reading, and I like to make informed decisions, and you know, academics help one to understand issues. So it is the quest for knowledge, continuous learning.

What message do you have for the upcoming generations?

Whatever you are doing, put your heart to it. Let them learn to work hard. Whatever they are doing, whatever they pick up to do, let them work hard at it, and with prayer the person will succeed. Some of them will say they are too dull, they can’t pass. It’s not true. Sometimes I tell my students, some of you are afraid of using your brain. Your brain won’t cry if you utilize it. Exercise your brain, tickle it; make it think. You know one person may be better than another, naturally the way God makes it, but I don’t think there is anybody who is so dull that you must continue to fail.

Why specializing in film studies in your PhD, how much do you love movies?

As a matter of fact, I’m not crazy about films, but not averse to them. However, I’m drawn more to political programmes.

4 Takeaways From The Netherlands’ Win Against USA