Given the travails of Widows in African society generally, founder of the Centre for Values in Leadership (CVL), Prof Pat Utomi has called for viable legislative enactment to protect the rights of widows in Nigeria in order to forestall further deprivation that they suffer in various communities.

The Widow Support Centre which is currently anchored by Utomi’s CVL is a foundation focused on empowering widows in different areas of endeavour.

Giving background to what led him into setting up the Widow Support Centre, Utomi said what he saw in the life of the wife of his friend who died of cancer made him believe that widows in the country undergo a lot of harrowing experiences ranging from deprivation, marginalisation, discrimination and economic hardship.

“Thirty years ago, we set up a centre here in Surulere, (St. Anthony Catholic Church) and Cardinal Okogie and Raphael Adebayo came to dedicate it. And we began to organise it, went round churches on the mainland, asking them for the list of widows and then made them members of the centre,” Utomi stated.

He said the centre over the years has organised entrepreneurship programme for the widows such as skills acquisition in bakery, soap making, cosmetology, ICT, tailoring and other business skills.

He further stated that the centre also set up widowhood rights programme which focussed on sensitising widows about their rights.

“We have a number of things such as micro-credit for them, skills training, entrepreneurship.

“Sometimes we organise laywers to defend widows in awkward situations. Sometimes, some would accuse a woman and her children of killing their father, and they would just put them in jail for no just cost. So we get lawyers to go and fight those kinds of cases.

“There was a lady who was writing a PhD thesis on widowhood rights in eastern Nigeria, to encourage that effort, we began a monthly and annual workshops on widowhood issues and rights. These workshops went on through the years.”

The Professor of Economics also disclosed that the centre with the support of various corporate organisations and individuals, organise micro credit scheme for widows which gives them access to interest-free fund to set up small scale businesses, adding that over 100 women have benefited from the scheme.

On his projection in the coming years, Utomi said they intend to centralise activities of the centre and come up with more programmes to address the status of women in the society.

He said “We obviously seek to bring to fore many of the issues around legislation on the rights of women and rights of families; this business of the man dying and his brothers wanting to take his property, living his wife destitute, so that no society should allow things like that to go on.

“So we we seek change of the laws to make sure that those who try to make lives of widows miserable, gets some consequences for their behaviour. All of these things are part of what we would be looking at.”

In an interview with Prime Business Africa, the programme coordinator of the Pat Utomi Widow Support Centre, Anuli Nnaemeka Oyiboke said the centre with support from organisations like medserve, and some others have been able to deliver goodies to women on annual basis for the past 30 years.

She encouraged widows to have lofty ambitions and engage in entrepreneurship to improve their lives, adding that they should not see the death of their husbands as end to their life aspirations.

Anuli implored corporate organisations to support the centre in the humanitarian cause of improving the life of widows in the society.

She disclosed that some of the skill acquisition programmes organised for the widows in the past were extended to their children who acquired some vital skills and became empowered economically.

The centre has over 200 widows as members from varied backgrounds and living in different parts of Lagos.

Bags of rice, noodles, wrapper, vegetable oil, medical items and some other consumables were distributed to the widows at the event.
Commenting on the goodies for the widows, Utomi said, “This is a challenged society, inflation has been making things tough. We just gave them something to make them happy in the festive season.”
He added that more goodies that will come from corporate friends of the centre will still be distributed in the coming week as Christmas season approaches.
He remarked that embarking on such humanitarian activities gives him a sense of fulfilment. 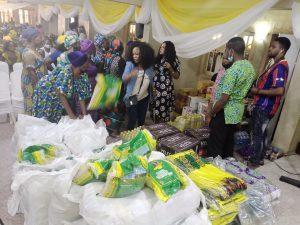 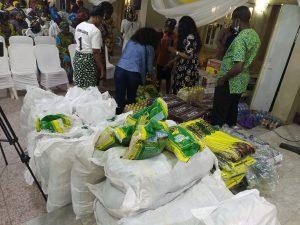 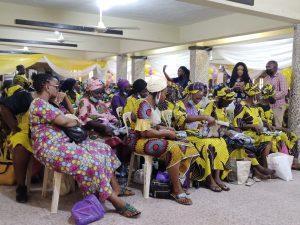 A Time To Begin Again – Utomi