The Central Bank of Nigeria (CBN) has explained that the Naira notes redesign policy it recently introduced would help to remove fake currency in circulation and discourage hoarding of cash by members of the public.

The apex bank is of the view that the policy would also help to streamline the volume of banknotes in circulation.

Deputy Director, Currency Operations Department, CBN, Amina Abdumalik Halidu-Giwa, said central banks all over the world restructure and redesign currencies at regular intervals for different reasons such as checking the circulation of counterfeit notes by increasing the security features and the aesthetics.

Speaking as a resource person at a webinar organised by the Nsukka and District Society (NDS) arm of the Institute of Chartered Accountants (ICAN), on Thursday, December 1, 2022, Halidu-Giwa said the CBN had observed hoarding of cash by Nigerians which made the apex bank keep printing naira of various denominations every year with the attendant cost implications.

“Central banks all over the world restructure. Most of their major concerns have to do with counterfeit,” she said.

”There is zero tolerance for Counterfeit. The Moment you realise that your data of counterfeit is growing, there is danger to your currency. So it is important to change to stay ahead of counterfeiters.”

Recall that the CBN governor,  Godwin Emefiele, had in October 2022, announced re-designing of the N200, N500 and N1,000 banknotes. The move was followed by the unveiling of the new naira notes by President Muhammadu Buhari, the CBN governor and other stakeholders in the financial sector, during the Federal Executive Council meeting on Wednesday last week.

The CBN governor subsequently announced that the new notes would begin to circulate from December 15 alongside the old notes until January 31, 2023 when they (old ones) will be completely phased out.

President Buhari had in a recent speech indicated that he approved the redesigning of the naira and that the new notes had more security features.

Halidu-Giwa explained that re-designing the currency became necessary given that it had been over a decade they were introduced.

She said it is a global practice to redesign banknotes every five to eight years.

She disclosed that about 99 percent of the counterfeit was discovered in the N500, N1,000 and N200 notes in circulation.

“The longer you live the note in circulation, the more counterfeiters perfect it, because theirs is trial and error. They keep trying until they perfect it. It is recommended that it should be changed from time to time.”

She stated that the country was facing some challenges which necessitated the re-designing of the currency notes.

“We have hoarding. Every year, we print volumes of cash, issue and they disappear. We can’t find the money because they are not in CBN’s vault and they are also not in the vaults of deposit money banks. So, it is hoarding. I don’t know why Nigerians love to keep money at home.”

She said the result of that is that dirty and unfit notes circulate in the financial system. “If you don’t have your banknotes circulating properly, coming back to the banking system and the dirty ones being removed, you will keep recycling the dirty notes. Go to other countries and you will see how their notes are clean.”

She further stated that hoarding of cash is as a result of engaging in illegal transactions which makes the individuals afraid of depositing them in banks. One of the challenges we have, of course, is hoarding.

“Our data on counterfeit have been growing over the years in huge numbers and they are cut across all the states of the federation. Everywhere people are printing the naira. So our figures were going up, and 99 per cent of all those counterfeits are in those three denominations that we are changing; that is the N1,000, N500 and N200. It is really a challenge to currency management,” she lamented. 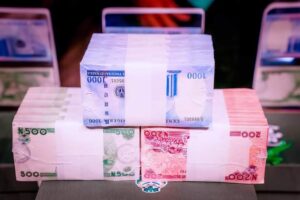 She said the currency in circulation outside the banking system is 85 per cent, leaving only 15 per cent which according to her is a very big challenge in currency management.

“If you keep money outside the bank, the result is illegal transactions. That’s why kidnappers can easily ask for millions because they know that money is out there.”

The CBN’s deputy director of currency operations department also identified cases of abuse of the naira which according to her include, hawking of new naira notes and spraying at ceremonies. These she said, shorten the life span of the currency, and coupled with hoarding, the apex bank is constantly compelled to mint new notes to circulate.

On the risks associated with the currency reissue, such as difficulty for the unbanked rural dwellers in depositing banknotes, and logistics failures leading to inadequate supply of the new currency notes, Halidu-Giwa stated that the CBN has introduced some measures to mitigate the challenges.

According to her, the mitigation strategies include deployment of Shared Agent Network (SANEF) to rural areas to facilitate deposits/cash exchanges, robust sensitisation through media outlets and CBN branches about other alternative channels (e-Naira, Mobile Money, Internet Banking and POS).

On the expected benefits of the currency re-design policy, she said it is expected to encourage use of electronic channels of financial transaction which will boost the cashless policy of the CBN and also deepen financial inclusion.

Other indirect benefits of the policy according to her is that when there is increase in number of citizens with accounts, it would widen the tax base, improve fiscal revenues and enhance credit provisions.

Earlier in his opening remarks, Chairman, ICAN, Nsukka and District Society, Mr. Obinna Onyegbuna said the naira reissue is a good policy, noting that only those with huge cash in their possesion and have ulterior motives that complains about it.

Commenting on the programme, the moderator, Dr. Jonathan Ogbuabor said members of the public needed appropriate sensitisation about the policy to embrace it and cooperate with the government in the implementation process to achieve the desired effect on the economy.

The webinar was in collaboration with the CBN Currency Operations Department, with Prime Business Africa as a media partner.