Since 2016, Lagos has been hosting the biggest art exhibition in West Africa, bringing thousands of artists, connoisseurs, visitors and tourists from across the continent and different parts of the world to what has now become a major event in the nation’s culture and tourism calendar.

Known as Art X Lagos, the fair was launched as a dynamic platform to showcase and support the breadth of contemporary art from Africa and its diaspora. Founded in 2016 by Tokini Peterside-Schwebig, daughter of Atedo Peterside, one of Nigeria’s leading investment bankers who has since retired into philanthropy and political activism, the exhibition holds toward the end of every year. This year’s edition, the seventh and its most ambitious to date, took place between Thursday, November 4 and Sunday, November 6 at Federal Palace Hotel, Victoria Island.

Over 120 artists from over 40 countries across Africa and in the Diaspora, presented by 31 leading international galleries, participated. There were live exhibitions, talks and performances, in addition to a virtual fair on ARTSY for the benefit of global audiences.

Among the exhibitors this year was Ms Sorella Acosta, a Belgian with Spanish ancestry, who makes a living dealing in African arts in London and Barcelona. ‘’This is the biggest exhibition in the whole of West Africa, and one of the biggest in the continent’’, she enthuses. There are, however, some small exhibitions across the continent like the Cape Town Art Fair which holds in February; the Biennali in Darkar (May-June) and smaller activities in Bamako and the contemporary photography and sculpture fair in Ouagadougou, Burkina Faso. But they pale in comparison with Art X Lagos. Acosta and her husband have been participating in the Lagos exhibition for the last five years because of their deep interest in African arts and wide connections with African art collectors.

READ ALSO  Nigeria At 62: No Cheers, No High-fives in Nigeria’s Citadel Of Learning

Ms Isabella Vegas, an associate director in a London-based gallery, Tiwani Contemporary, is another enthusiastic participant. She also gushes over the rapid growth of the fair and the richness of African and Nigerian contemporary arts. ‘’This fair is one of the best in the African continent, I am sure it will grow bigger and bigger in the years ahead’’, she said. Tiwani Contemporary is owned by Ms Maria Varnava, a Greek Cypriot, who grew up in Lagos and had established a gallery that represents Africa and African Diaspora. Of course, the well-known Nike Art gallery was there in full force and the doyenne herself, Chief (Mrs) Nike Okundaya, was present to add colour to it. Art enthusiasts believe that art provides us with the ability to express ourselves; and through that expression, we communicate our own unique emotions, thoughts and experiences. Artists are widely regarded as some of the most talented people in the world which is why their works are so pricey.

Right from the fair’s inception in 2016, Access Bank has been its gold sponsor, but with the restructuring of the bank into a holding company early this year, Access Corporation, its parent company, has taken over the sponsorship. The touch of excellence for which the Access brand is renowned has indisputably turned the fair into the cornerstone of the African art sector. It is also a unique cultural event that goes beyond the bounds of traditional art fairs and delivers several days of dynamic art experiences and events. It is indeed, the first of its kind in West Africa. Since its debut in Lagos, the fair has grown to host galleries and artists from over 40 countries and become renowned for its programmes which include Art X Talks, a lively panel discussion series; Art X Live, a one-of-a-kind showcase featuring collaborations among some of the fastest-rising artists and musicians on the African continents, as well as specially curated presentations and interactive projects. These programmes have featured an array of emerging and established artists from the continent and diaspora, including keynote artists such as El Anatsui; Wangechi Mutu; Njideka Akunyli-Crosby; Yinka Shonibare and Hank Willis Thomas. 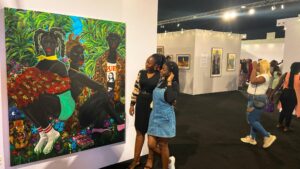 The beauty of Art X Lagos lies in its huge contributions to the growth of tourism in the country and in positioning the city of Lagos as a place to visit every fall. Modern cities are known for the galaxy of events they host all-round the year, whether it is fashion shows, art fairs, marathons, safaris, beauty pageants or Motor sports. The Lagos Marathon in February and the art fair in November – both sponsored by Access Corporation – are the two main attractions that define Lagos life. Lagos State government is keenly aware of the rising impacts of this exhibition and the roles of cultural tourism in a thriving metropolitan city. At the opening session of the fair Thursday evening, Governor Babajide Sanwo-Olu announced that its new museum would soon be open on the Island; and to further boost the growth of the fair, he offered generous incentives to the promoters to acquire a purpose-built venue for the yearly exhibitions. On his part, Access Corporation’s chief executive, Herbert Wigwe reaffirmed the company’s commitment to ‘’anything that conduces to the beauty and greatness of this country because we are proud of being Nigerian’’. He noted that the fair is growing rapidly every year and spoke about the poignancy of the theme for the 2022 edition which is ‘’Who will gather under the baobab tree?’’

Certainly, Lagos is gradually becoming a destination of choice for culture and art aficionados. With the comprehensive overhaul and restoration of the National Arts Theatre, Iganmu and the new museum being built by the state government, the city has stamped its authority as the nation’s tourism capital.