Following the extension of deadline for collection of Permanent Voter Cards (PVCs) by the Independent National Electoral Commission (INEC), the rate of collection has increased recently with Lagos recording 22,000 and Edo 5,600 during the weekend.

According to data received by Prime Business Africa, 22,062 PVCs were collected across 20 local government areas in Lagos on Saturday, 21st January, 2023. 11,827 were male voters while 10,235 were females. Eti-Osa LGA recorded the highest PVC collection with 5,832, followed by Alimosho which had 4,114.

INEC had on 13th January, announced extension of deadline for the collection of PVCs to Saturday, 29th January 2023 to enable registered voters do so. 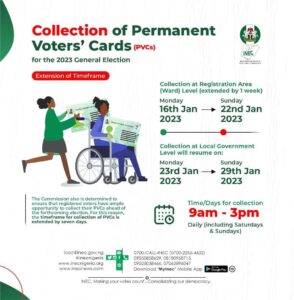 The Commission said it was not determined to ensure that registered voters have ample opportunity to collect their PVCs ahead of the forthcoming election, hence, the extension of timeframe for collection.

The electoral body had also said it printed  13.8 million (13,868,441) PVCs for all new valid registrants as well as applicants for transfer or replacement of cards, and urged issuing officers to compile any complaints about non-availability of cards and forward to appropriate authorities for necessary actions.

There were allegations of discriminatory issuance of PVCs in some parts of the country which the commission said it was investigating.

Utomi Urges INEC To Extend Deadline For Collection Of PVCs