Environment activist and Founder of the Health of Mother Earth Foundation (HOMEF), Nnimmo Bassey disagrees with the Nigerian Vice president Yemi Osinbajo on the latter’s argument that western countries are  being  hypocritical with their demand on Africa to draw back on fossil fuel and mitigate the global climate change situation. 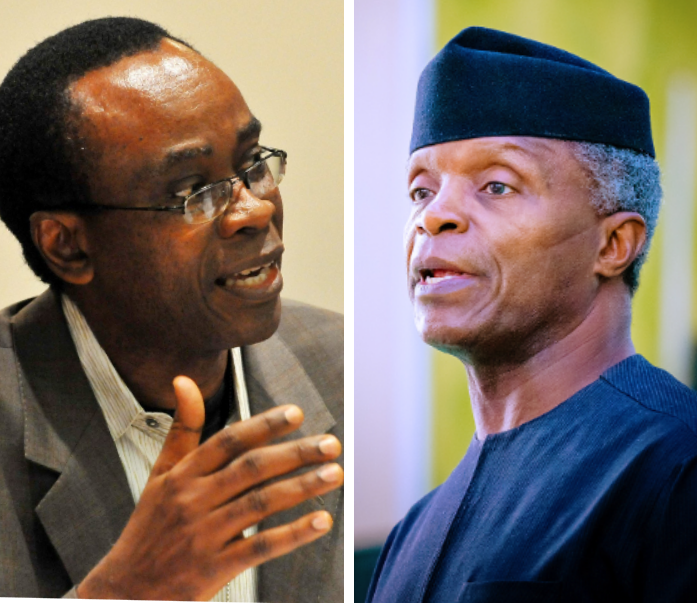 The Nigeria’s vice-president  had in an online article published in ‘The Economist’ on May 5, 2022, argued that the West is hypocritical  with its rich countries’ climate policies that tend to put enormous and unrealistic pressure on African countries. VP Osinbajo went further to say that Africa needs more energy and that West ”cannot demand more stringent actions than they will commit to themselves.”

But in a terse response to the Vice President’s position which he expressed in an exchange with  Prime Business Africa, a multimedia newspaper, Mr Bassey, a renowned  Environment activist said  Osinbajo’s campaign  could be likened to a ”struggle to keep the fossil addiction.”  He warned that the shift from fossil fuels is inevitable whether African countries are ready or not.

There was a recent flood in Durban, South Africa that saw over 400 perish; the cyclone Idai in Mozambique that killed well over 1000 in 2019 and destroyed infrastructure worth over $2 billion; as well as the 2012 Nigerian floods that killed 363.

”Yes, the West is hypocritical, but VP Osinbajo’s article (in The Economist)  doesn’t consider the Climate horrors Africa is unprepared for,” the Environment activist told Prime Business Africa on Saturday.

VP Osinbajo’s  position on Africa’s enormous need for more energy presupposes that the West must show understanding for continued oil exploration and exploitation in large scale amid climate change concerns . But Nnimmo Bassey, the Time magazine’s 2009 Hero of the Environment,  author and poet who chaired  Friends of the Earth International from 2008 to 2012, told Prime Business Africa that VP Osinbajo’s Nigeria in particular  has had nothing to show for its 64 years of oil exploration in commercial quantities.

Osinbajo, Nigeria’s current Vice President, is in the crowded political race  to succeed his principal, President Muhammadu Buhari in 2023.

Nigeria remains in dire straits regarding all indicators in spite of of billions of US dollars made from commercial mining of crude oil in commercial volumes in the past 64 years.  Bassey buttressed the fact that the African giant  and the rest of the continent had also failed to institute any climate change mitigation or adaptation measures in the period under review.

In Nnimmo Bassey’s opinion, Africa should rather  demand a recognition of a climate debt accumulated by years of massive carbon pollution, considering that the continent  has not  contributed up to 3% of the greenhouse gases in the atmosphere. According to him, the key demand should be a repudiation of voluntary emissions reduction as encapsulated in the Paris Agreement and a return to the pathways captured in the Kyoto Protocol.

”That Protocol required polluting nations to cut emissions at scientifically determined levels and in full cognizance of the justice principle of ‘common but differentiated responsibilities’ and capacities.” Key demands at multilateral spaces, Bassey advised should include payment of a climate debt computed in terms of damage already suffered, projected losses and damage, plus resources needed for the transition.

He explained that as legitimate as the argument is that West is hypocritical, ”we cannot overlook the reality that we are the worst hit in terms of climate impacts.”

He argued that  industrialized countries like France which have decided to halt extraction of fossil fuels in their countries should be barred from extracting such fuels in other countries. ”To allow them to stop extracting at home, but extract in Africa and elsewhere is the hallmark of the hypocrisy we should be talking about,” Bassey told Prime Business Africa, just as he stressed that Total (of France) remains  the key driver of the exploitation of crude oil in Uganda.

He further warned that the war in Ukraine portends big harms for Africa, its environment and the climate because the cutting off of Russian gas is giving impetus to the otherwise moribund proposed extension of the West African Gas Pipeline to Europe through Morocco.  ”It may also give impetus to the drilling of oil in Okavango, Namibia/Botswana, in disregard of the negative impacts on the local communities, not mentioning that the region is a biodiversity hotspot,” Bassey alarmed.