This is coming after the commission officially extended the registration till further notice.

According to INEC, as at 7 am Monday July 4, 2022 record shows that fresh registrations hit 10,487, 972 in week 12 of the fourth quarter since the CVR exercise began in June last year.

The report under review also showed a three million increase between the May and June in total number of registrants with completed registration.

In the last week of June the INEC CVR update showed that Fresh Registrants were 10,487,972.

The commission recently, announced official extension of the Continuous Voter Registration exercise which started in 2021 from June 30th till further notice.

The extension followed  a court ruling in response to an action filed by a human rights organisation, Socio Economic Right and Accountability Project (SERAP) and other concerned Nigerians.

More and more youths are willing to vote in what is considered Nigeria’s most crucial election since 1999, as the most populous African country struggles with security and economic challenges. 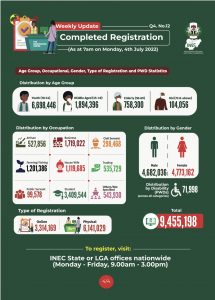 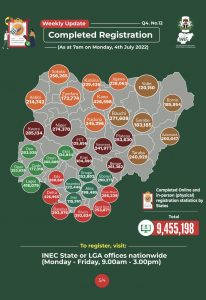 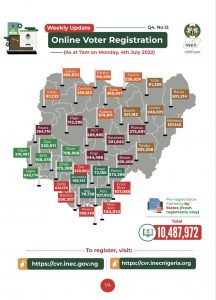 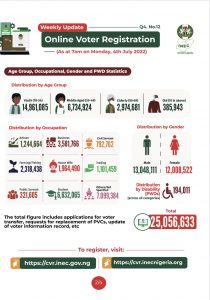