President Muhammadu Buhari has stated that due to dwindling public resources, it is no longer feasible for the government to bear the cost of funding of higher  education alone. He tasked authorities of higher institutions in Nigeria on  strategic revenue generation drive for financial stability.

The president who gave the advice on Tuesday in Abuja at the Fourth National Summit on Diminishing Corruption in the Public Sector, said the funding alternative is also obtainable in other countries.

“Due to declining resources, government cannot bear the cost of funding education alone. I task our academics to attract endowments, research and other grants to universities, polytechnics and colleges of education similar to what obtains in other countries,” Buhari stated.

The President who declared the Summit open at the State House, stated that corruption in the education sector continues to sabotage government’s investments, adding that critics downplay funding by focusing only on budgetary allocations.

He urged a more comprehensive re-evaluation of expenditure, arguing that measuring financing of education sector should include total education budget of each year by both federal and state budgets and other financial commitments in their totality.

The Summit was organised by the Independent Corrupt Practices and Other Related Offences Commission (ICPC), Office of Secretary to Government of the Federation (OSGF) and Joint Admission and Matriculation Board (JAMB).

Highlighting the importance of the summit, Buhari said, “This year’s summit will mirror how corruption undermines educational policies, investments and create an unfriendly learning environment for our youths.

“Incessant strikes especially by unions in the tertiary education often imply that government is grossly underfunding education, but I must say that corruption in the education system from basic level to the tertiary level has been undermining our investment in the sector and those who go on prolonged strikes on flimsy reasons are no less complicit.

The president explained that “the 1999 Constitution places a premium on education by placing it on the Concurrent List, thereby laying the responsibilities of budgeting and underwriting qualitative education on both the Federal and State Governments.

“The total education budget for each year is therefore a reflection of both federal and state budgets and should be viewed other financial commitments in their totality.

Buhari said he is aware of the manifestation of various forms of corruption in the nation’s school syste, adding that the government is deeply concerned about it.

the manifestation of various forms of corruption in the education sector.

“I am aware that students in our universities for example, use different terminologies to describe different forms of corruption they experience on our campuses. There is sorting or cash for marks/grades, sex for marks, sex for grade alterations, examination malpractice, and so on.

“Sexual harassment has assumed an alarming proportion. Other forms of corruption include pay-roll padding or ghost workers, lecturers taking up full time appointments in more than one academic institution, including private institutions, lecturers writing seminar papers, projects and dissertations for students for a fee, and admission racketeering, to mention only the most glaring corrupt practices,’’ he said. 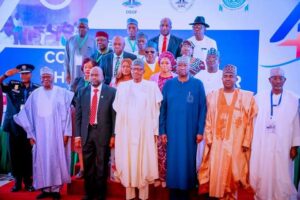 The president referred critics of government funding of education to also look at the aggregate education budget in all 36 states of the Federation and that of the Federal Government, combined with the internally generated revenues of the educational institutions.

He further highlighted other activities of his administration in the education programme such as the implemention of the Home-Grown School Feeding Programme to provide a free balanced meal per day for each child that attends public primary school in order to encourage school enrolment and facilitate access to universal basic education.

The president commended the ICPC Chairman for investigating and prosecuting sexual harrassment cases and encouraged the commission to continue in that regard.

He however, assured that the Government would continue to fund learning within realistically available revenue, and urged stakeholders, including the media to equally advocate transparency in the amount accruing from internally generated revenue by educational institutions and accountability on how such funds are expended.

“Corruption in the expenditure of internally generated revenue of tertiary institutions is a matter that has strangely not received the attention of stakeholders in tertiary education, including unions.

“I call on stakeholders to demand accountability in the administration of academic institutions and for unions to interrogate the bloated personnel and recurrent expenditure of their institutions. Let me also implore the Unions to work with government to put faces and identities to names on the payroll,’’ the President added