ByFour Super Eagles players could be action this weekend as only four Premier league matches are expected to hold in the aftermath of the demise of Queen Elizabeth II on Thursday.

The Premier League body met Monday and four fixtures are being considered to hold this weekend with three of them involving Nigerian players.

Joe Aribo’s Southampton is expected to travel to Birmingham as the Saints take on Aston Villa, while the duo of Taiwo Awoniyi and Emmanuel Dennis will hope to be in action as Nottingham Forest welcome Fulham.

The Premier League on Monday revealed that a decision on the return of league games this weekend has been taken. 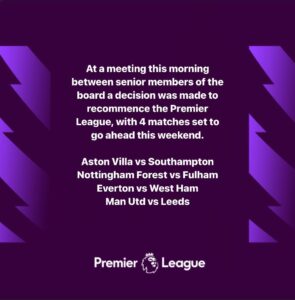 Match day 7 in England, plus Scotland, Wales and the entire British Islands were called off last weekend in honour of the late monarch.

However more matches in the English topflight are set to suffer more postponements with the Premier League only approving four out of 10 matches with adequate number of policemen not guaranteed due to the need for the security personnel during the funeral for the late 96 year-old monarch.

The four matches that has gotten the green light to go ahead are: Aston Villa vs Southampton, Nottingham Forest vs Fulham, Everton vs West Ham and Man United vs Leeds.

The UEFA Champions League and Europa League games have however suffered mixed fortunes.

While Manchester City’s game will go ahead, Arsenal will not host PSV as their fixture has been postponed.

Arsenal banished the disappointment of losing out on January transfer

As technology and the need for communication strengthen globally, so