As the Peoples Democratic Party (PDP) begins preparations for the November 6 Anambra governorship election, several party leaders, aspirants, and stakeholders have joined in throwing their support behind the party’s flag-bearer, Valentine Ozigbo.

Mr Ozigbo received his certificate of return on Wednesday, June 30, 2021, at the PDP headquarters in Wadata House, Abuja, after emerging the party’s candidate at the primary election held on Saturday, June 26, 2021, at the Prof Dora Akunyili Women Development Center, Awka. 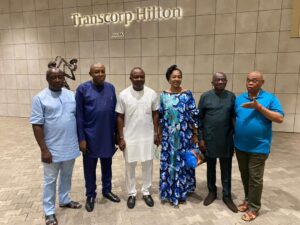 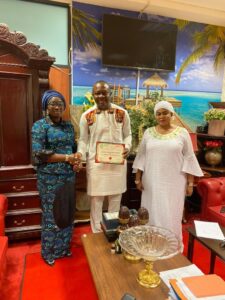 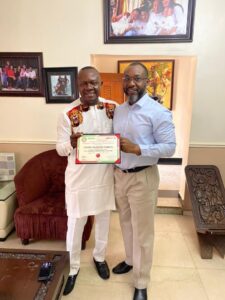 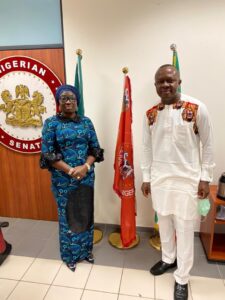 In the run-up to the PDP primary election, Ozigbo had iterated the importance of post-primary election unity and has reached out to co-aspirants and party leaders to ensure that PDP wins at the poll.

After picking up his certificate of return, Ozigbo paid a courtesy visit to a former Nigerian Vice-President and the PDP’s presidential candidate in the 2019 general election, Alhaji Atiku Abubakar. The closed-door meeting dwelled on ideas and strategies on the way forward ahead of the poll.

Ozigbo also visited one of the prominent aspirants in the just-concluded primary, Senator Uche Ekwunife, at the National Assembly Complex, Abuja. Ekwunife was the second-runner up behind Ozigbo at the primary election and was one of the first dignitaries to congratulate him after his victory.

“In the past few years, the PDP has shown readiness to evolve and be more democratic. This new direction is evident by the goodwill my candidacy has received since my emergence on Saturday. I have started the process of ensuring that every stakeholder is on the same page as we approach the November election,” Ozigbo remarked.

Meanwhile, several political stakeholders, co-aspirants, and groups have congratulated Mr Ozigbo on his emergence as the party’s candidate.

In a congratulatory statement, one of the aspirants, Dr Tony Nwoye, agreed that the party delegates had made their choice and urged other aspirants to work with Ozigbo to ensure victory at the November 6, 2021 polls.

Dr Nwoye expressed readiness to work with Ozigbo and advised him to extend the hand of fellowship to other aspirants and party stakeholders who might feel aggrieved with the outcome of the process.

Mr Oseloka Obaze, the PDP candidate in the 2017 governorship election in Anambra,, congratulated Mr Ozigbo on clinching the party’s ticket. Obaze also pledged to support him ahead of the election.

“There’s more work left to do to capture Govt. House, Awka, and reunite our great party ahead of the November 6 elections. We must also all rally to the cause and collectively work hard to reconcile our party.

“As a PDP stakeholder, I offer my full and unalloyed support to Val personally and the VCO team in the campaign ahead and in every effort to rebuild our party. Now that the primaries are over, I call on all the PDP aspirants to come out and fully support Mr Ozigbo so that we can collectively achieve victory on November 6, 2021,” Obaze remarked.

“We agreed on the need to sustain his ongoing reach out to other leaders of our state so that we all will be on the same page towards winning the election and driving the state development,” Engr Azubodu said.

An aspirant, Chief Emeka Etiaba (SAN), also congratulated Ozigbo, describing his victory as “God-delivered” and wished him victory at the polls.

“Your way pleased God, and he gathered unlikely men to work for you. I say congrats to you once again, and I urge you to focus on God and not little gods for your eventual success,” Chief Etiaba said in a short statement.

Another former aspirant, Dr Ifedi Okwenna declared that “as a party man”, he is obligated to support Ozigbo ahead of the election.

“I congratulate Val Ozigbo and my Party, PDP, and I promise to work for our collective success,” his statement read.

Lady Chidi Onyemelukwe, a former aspirant, congratulated Ozigbo, describing his victory as a reflection of the people’s voice.

“I congratulate my friend and brother Valentine Chineto Ozigbo on his emergence as the flag bearer of our great party,” Lady Onyemelukwe wrote.

“The people have spoken; God has spoken. Our main journey as the PDP family to the seat of government house Awka starts in earnest. I urge our entire PDP family to put hands together to ensure that this becomes a reality come November 6, 2021. It is long overdue. Together we can, and together we will!”