THE 12th CORA-NPL Book Party which will hold on Sunday August 8, 2021 at the Eko Hotel & Suites, VI, Lagos, will feature eleven shortlisted novelists jostling for the 2021 $100,000 Nigeria Prize for Literature (NPL).

The NPL is the biggest cash prize award for a literary competition on the continent, according to the organisers.

The Committee for Relevant Art (CORA), which organises the yearly Book Party with support of
the Nigerian Liquefied Natural Gas (NLNG) Ltd, disclosed that the event starting at 2pm, will hold in
hybrid format – In-Person and Virtually.

The 11 writers on the shortlist are expected to attend physically, but those abroad will join
virtually.

Speaking on the event, CORA, the 30-year-old promoters of art and literary productions and expression said, “The CORA-NPL Book Party affords members of the public the opportunity to interact with the authors on their shortlisted works towards the announcement of the shortlist of three that will eventually yield the final winner of the Prize later in the year.”

On his part, Eyono Fatai-Williams, General Manager External Relations and Sustainable Development of the NLNG, said, “The party also helps to promote a reading culture, especially among young Nigerians, engage relevant publics in literature, academia, and the media and stimulate public interest in the Longlisted works and the NPL.”

The organisers said the review was organized in response to calls that the prize should do more than being a
glamourous Gala night in which one author got rich, but the Nigerian book trade and literary
scene as a whole didn’t seem elevated. 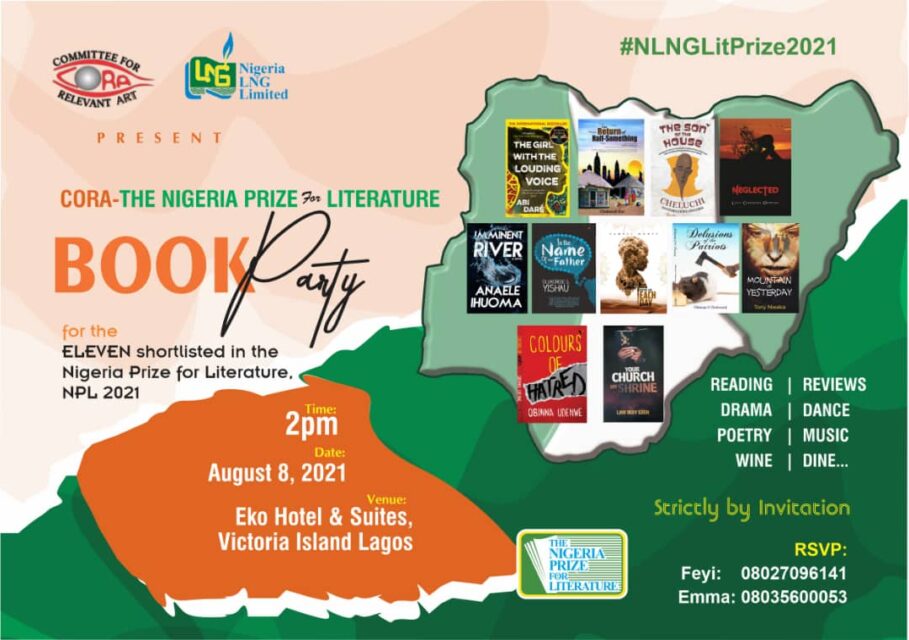 Jahman Anikulapo, Programme Chair of CORA, who conceived the idea of the book party during a
review of the first five years of the award in 2009, said, “Although that is quite some significant amount of money in anyone’s account, CORA sees in it, an opportunity for the creation of an entire economy around the book trade.”

Anikulapo, a former Arts and Culture Editor at The Guardian (1992-2003) and; Editor of The Guardian on Sunday (2003-2013), added, “CORA believes that a full ecosystem of the book trade is still possible in spite of the age of twitter. That we can have robust, publishing, book clubs, libraries in every corner of the city, online sales of ebooks and audiobooks, active proliferation of book blogs, book reviews pages, authors’ appearances to audiences to read everywhere in bookshops, in traditional markets, in shopping malls.”

The 11 novels shortlisted for the 18th NPL include, in alphabetical order:
1. Delusion of Patriots – Obianuju V. Chukwuorji,
2. Give Us Each Day – Samuel Monye,
3. Imminent River – Anaele Ihuoma.
4. In The Name of Our Father – Olukorede S. Yishau,
5. Mountain of Yesterday – Tony Nwaka,
6. Neglected – Lucy Chiamaka Okwuma.
7. The Colours of Hatred – Obinna Udenwa,
8. The Girl with The Louding Voice – Abi Dare,
9. The Return of Half- Something – Chukwudi Eze,
10. The Son of The House – Cheluchi Onyemelukwe-Onuobia,
11. Your Church, My Shrine – Law Ikay Eze